Emotions have a lot to do with a lot, actually.  But not just emotions; we humans are also uniquely capable of reasoning, of logical thought.  To put it simply, we have higher brain functions.  Yet it’s commonly thought that feelings come from the lower, more primitive part of our brains.

I have struggled for months now to find my voice for this blog.  There is so much on the Internet about mental health and mindfulness and changing one’s thinking — and changing the brain — that the more I read, the more I want to know, and share.  But I have to use my own voice, my own opinions and experiences to communicate.  For the time being, I’m winging it.

What I do know, from my experiences both as a therapist and as a fellow human, is that many of us tend to be ruled by our emotions.  Even if we logically think, for instance, that a person is not good for us, we still feel for the person (or feel guilty, or any number of emotions) and maybe stay too long in a relationship.  I am not making a blanket statement about difficult relationships; just using that as an example.  Of course I believe it’s possible people can change — if they want to.

To illustrate, an illustration: 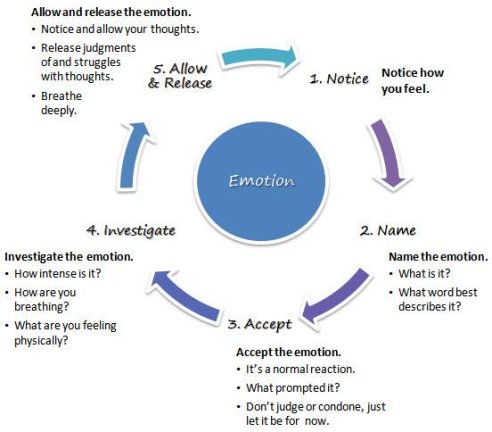 As you can see, it is a cycle: feel and name the emotion, accept it, rationally look at it, try to understand what it means in a particular situation, and don’t judge yourself for the feeling.  We are human, we have feelings.  That’s a fact.  There is nothing wrong with having a so-called “bad” feeling; it’s what we do with it that matters.

Sounds simple, but it’s not.  It is a delicate task that takes time and effort and practice,  but it’s worth it to make a beginning.

And now I have made my beginning here.

For a free 10 minute consultation.